You may remember the SPUHH (Simulating the Past to Understand Human History) event in Barcelona in 2014. It was a satellite to the Social Simulation Conference – an annual gathering of researchers whose models are concerned with complex social systems. This year edition of the SSC is taking place in Rome, September 19-23. The paper abstract deadline is 18th April.

Although there are no sessions dedicated specifically to archaeology this year, this is a great opportunity to get a bit of an insight into what our colleagues [working on humans you can actually talk to because they are not so very dead] are up to. Often you can find many commonalities between their and our problems, models and interpretations. Not to mention, an occasional check on what is going on in the world of social theory is always useful.

Like every year, the conference is followed by a week long summer school in social simulation using NetLogo. For more details see here: http://www.ssc2016.cnr.it/essa-s4/

As this year’s conference season is drawing to its end, I thought I’ll share a few reflections on the very successful SPUHH (Simulating the Past to Understand Human History) meeting in Barcelona. A satellite  event to the SSC (European Social Simulation Conference), it was one of the largest gatherings of archaeological modellers I’ve ever witnessed. The organisers filled three days with back-to-back presentations of archaeologically inspired simulation models intertwined with discussions, a great keynote by Tim Kohler and loads of social events (that 9 courses conference dinner will most decidedly go down in history!), and all that against the fantastic backdrop of Barcelona. In a word, it was a blast.

It was also a good round-up of all the, currently, ‘hot’ topics in archaeological simulations. So for all of those who missed it, here’s a short summary divided into the general themes linking the presented case studies. The breakdown may look familiar to some of you as many of the topics repeat from one conference to another. Follow the links if you want to learn more about the case studies presented and you can find the full conference schedule here.

In the classic ‘was the spread demic (people) or cultural (ideas)?’ ABM-genetic model the team from the Okayama University, Japan  led by N. Matsumoto and M. Sasakura shared their results on the Jomon-Yayoi transition, while in a similar vein but using classic diffusion equations J. Fort’s team presented their newest take on the Neolithic spread. The latter topic is easily the most popular case study among modellers and a number of other presentations focused on that subject. Pérez-Losada showed a detailed sensitivity analysis highlighting the effects of of different parameter values on the diffusion, while Crema and colleagues used it as testing grounds for evaluating the advantages of the ABC (Approximate Bayesian Computation) for determining the relative probability of tested scenarios.  Timm and colleagues gave a presentation about  a recently launched project focusing on Pleistocene dispersal. They mostly discussed the challenges the are facing in creating such a complex, multi-scale model given the dearth of available data but it’s definitely worth watching this space as the project unravels. This topic was also pursued by myself but with a special focus on the demographic dynamics of the dispersal. Finally F. Del Castillo and J. A. Barceló’s were on the other end of the demic to cultural diffusion spectrum with their model of cultural standardisation among hunter-gatherers and agrarian societies.

In this category, T. Baum gave a fantastic example of tackling simple research questions while exploring the underlying complexity of the system. His land-use simulation was build to figure out why the famous pile-dwelling settlements around Lake Constance (Germany) were so often moved from one place to another. A number of other case studies (Janssen and Hill, Oestmo et al., Lancelotti et al. and Saqalli et al., the last one being particularly worth mentioning ) were similarly focused on the land use and resource distribution over the landscape. With a more methodological focus O’Brien compared potential trackways through marshy area generated by a GIS-software with those simulated in NetLogo. Finally, Olševičová and A. Danielisová  integrated land use models to drive their simulation of the rise and collapse of a Celtic oppidum (you can check out the details of their impressive model combining cellular automata, agent-based modelling and system dynamics here).

It is easy to notice that the younger the more detailed and less abstract the models become. T. Brughmans and J. Poblome roman trade model and Fulminante and colleagues’ urban dynamics model were presented as simple networks of interaction but younger case study, such as J. Riley Snyder and O. Dilaver’s model of gigantic aqueduct connecting Constantinople with mainland Greece, P. Murgatroyd and V. Gaffney’s simulation of the march of the Byzantine army or K. Comer and K. Comer model of emergent commercial partnerships in renaissance Italy, were developed with a lot of details.

There were also a few models more general and therefore more difficult to classify such as G. Bogle’s combination of agent-based modelling and canonical theory, H. Inoue and C. Chase-Dunn’s model investigating the evolution of global inequality or N. Gotts  discussion on the role of communication technology throughout the ages.

In the introduction to the ‘Simulating Change. Archaeology into the 21st century’ Andre Costopoulos and Mark Lake complained about the weakness of the archaeological simulation and the scarcity of computational modelling practitioners. It looks like since their 2004 session at the SAAs a lot has changed, particularly in numbers but also in the breadth of the applications and techniques. The final outcome of the SPUHH conference was a long discussion on the need for an better integration of the field and more communication  with the general archaeological audience in order to bring simulation into the archaeological mainstream. So watch this space, there’s some great stuff coming up soon! 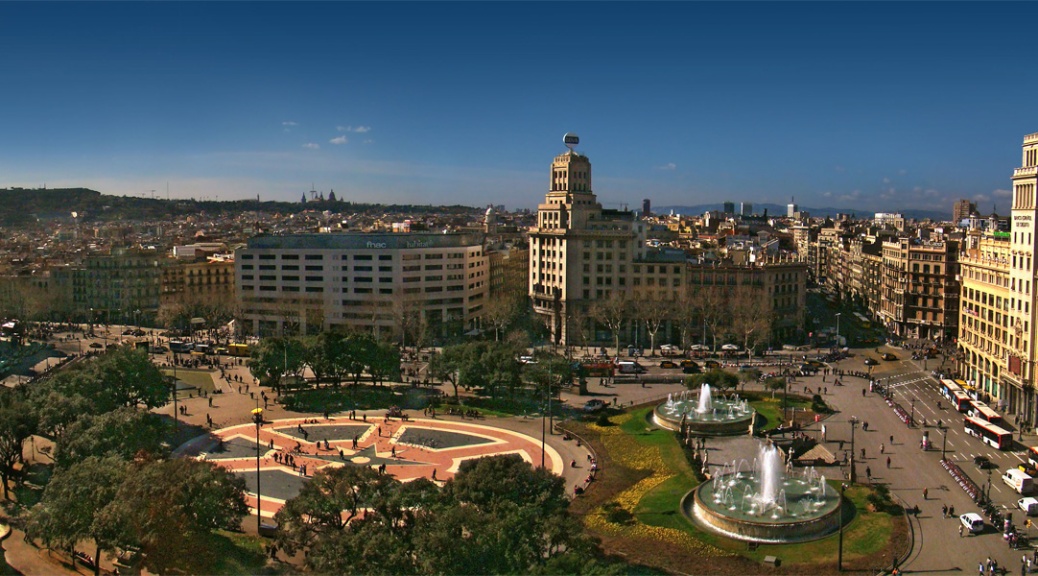 In the tough world of Academia there is nothing better than a conference in a city boasting with vibrant research community and a beach. For archaeologists working with computational modelling Barcelona fits the bill nicely and this year no excuses are needed to visit this absolutely fantastic city. After the success of the ECCS2013 last September Barcelona seems to become the world capital for modelling social complexity with at least three major conferences scheduled for 2014.

The European Social Simulation Association  will hold its annual meeting  at the Universitat Autònoma de Barcelona between 1-5 September, 2014.  You can find more information about the conference here.

But more importantly, our colleagues from the SimulPast project are organising a satellite event Simulating the past to understand human history. Although the conference is aimed at showcasing the achievements of the SimulPast project, the wide range of topics indicated by the organisers shows that we can expect a good set of interesting papers dealing with different aspects of modelling and complexity science applications in archaeology.

Finally, the conference is worth a trip even if only for the keynote speakers.  Timothy A. Kohler (Washington State University) is known from his Village Ecodynamics Project and, probably by all students thanks to his classic paper “Complex Systems and Archaeology” in Ian Hodder’s Archaeological Theory Today.  And we can only hope that someone will ask  Joshua M. Epstein (Johns Hopkins University) – the second keynote speaker  – his trademark question ‘Why model?‘

The Call for Papers closes this Thursday ( 28th, February, 2014).  According to the CfP the organisers look for a wide range of papers diverse in both archaeological but also methodological scope: Applications are welcomed on all subjects (from Anthropology, Archaeology, Geography and History) using different approaches to social simulation and presenting case studies from any region of the world and any prehistoric or historic period. Theoretical aspects of social and cultural evolution are also encouraged.

Coincidentally, at the same time (1-7 September) Burgos will be hosting the XVII Congress of the International Union of the Prehistoric and Protohistoric Sciences (UISPP). You can find the list of session here.

The second complexity science conference held this year in Barcelona is the 1st European Conference on Social Networks between 1-4, July, 2014. They haven’t opened their CfP yet so only preliminary information are available on their website but it looks as if it was going to have a strong archaeological twist.

Finally, the 6th International Conference on Social Informatics, although focused more on present rather than past human societies, may also be of interest to many, especially in light of the conference mission statement: This year’s special purpose of the conference is to to bridge the gap between the social sciences and computer science. We see the challenges of this as at least twofold. (..)  emphasis on the methodology needed in the field of computational social science to reach long-term research objectives. We envision SocInfo as a venue that attracts open minded researchers who relax the methodological boundaries between informatics and social sciences so to identify common tools, research questions, and goals. SocInfo will be  held in Barcelona between 10-13 November 2014.